Also, read about why it pays to have amazing graphics plus important text in the first THREE seconds.

Before creating a video

I didn’t want to waste my advertising dollars by targeting the wrong people.  I wanted to target people who are enthusiastic about photo editing software.

So, I asked Google who uses Photoshop.  They named these four occupations:

So, those are the people I targeted, both in my text and on the online video ad-creation page.   I created a script targeting those people.  Using the data from above, I aimed at writing for a 21 second video.  So, I could have only 3 or 4 sentences.

If you have trouble following these 29 steps, perhaps you should look through the YouTube video tutorial on this website.

1. My first step after the steps above was to make an audio recording of the script.  (My script is represented by the italics text in the above section.)

2. Saved the audio recording as an MP3 file and dragged it onto a new ScreenFlow screen.

Split the audio recording into the appropriate segments.  (See the green wave forms.) I arranged them in the proper order on the ScreenFlow timeline.

4. Using full screen mode, recorded the tiny segments of video that I wanted to be part of the video ad.

6. For each video clip, clicked on the gear icon in the lower left-hand corner.  Clicked on show clip inspector and dragged the right-hand end of the clip so that it was a bit beyond the audio clip.  (See the above screen shot.)

7. After this had been done for all clips, clicked on file > duplicate.

8. Deleted all clips except for one video clip.

9. Changed that single clip into an MP4 file.

10. Repeated that pattern for each video snippet.

11. Dragged each MP4 file from my desktop to a Keynote slide. 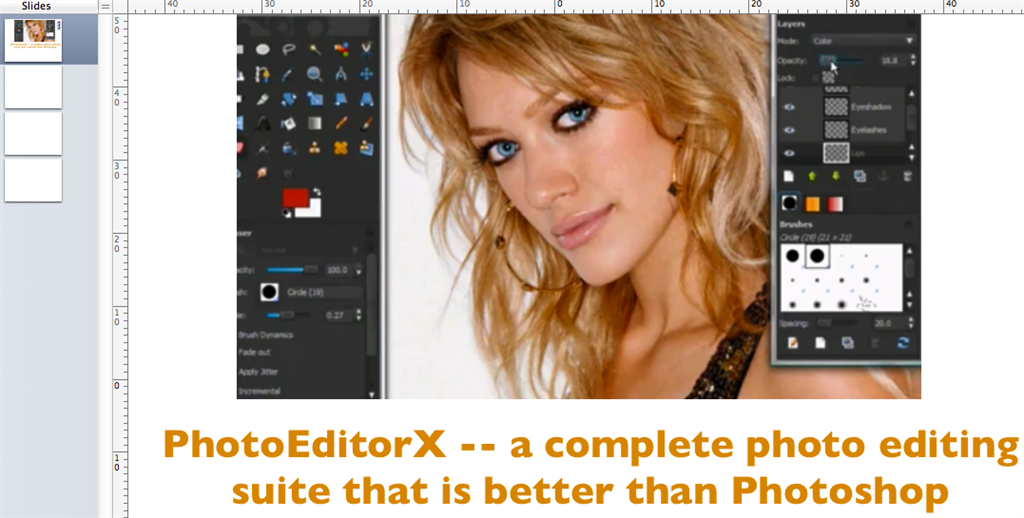 12. Typed matching text from my script below or beside the MP4 file and also created the CTA (call to action) text for the end.  Gave a Bitly address for the blog post promoting PhotoEditorX.

13. After all slides were finished, turned a screen recording program  (ScreenFlow) on and clicked the Keynote play button.

14.  Played the entire slide show several times until satisfied with the timing, etc.

15. Saved my new ScreenFlow video with a descriptive name.

16. Detached the audio and then deleted parts of video that would not use.

18. Centred my video properly on the screen and saved again.

20. Went into the ScreenFlow production that has all of the audio.

21. Deleted the video from that production.

22. Pasted the video from my clipboard.

23. Found the end of the section that matches my first audio clip.

25. Clicked on the clip inspector icon on the lower left-hand corner.

26. Changed the length of the video clip to align with the beginning of the second audio clip.

27. Using the same procedure, aligned each video segment with the proper audio clip.

28. After checking the video over several times I saved it and then exported it to the desktop as an MP4 file.

29.  Going into my Facebook timeline, clicked on Ads Manager > Green create ad button > Send people to your website.  Then created the online video ad.  (If making a Facebook video ad is not intuitive enough at this point, click the help button in the upper right-hand corner.)