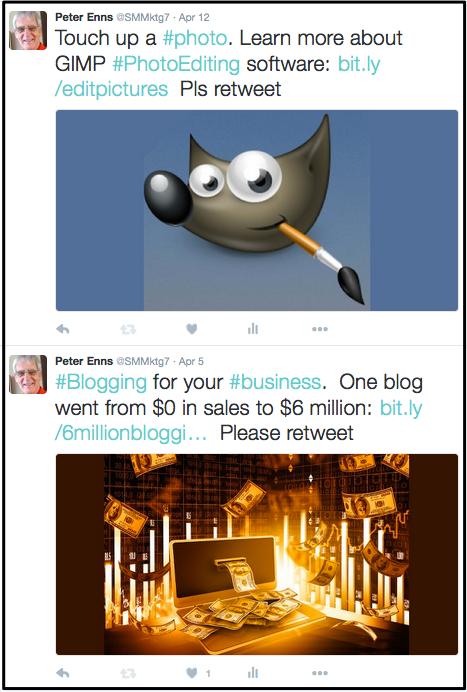 Scroll down to the image with the 5 red numbers below. Before a tweet is fully composed, it looks like that.   Let’s discuss those red numbers.

♦ One or more words without spaces that has a number sign in front.
♦ Clicking on #blogging, your visitors will be able to find every Tweet using that same hashtag.
♦ Click #SocialMediaMarketing within a tweet, they could see a large number of tweets about social media marketing.
♦ How to use hashtags most effectively: Hashtagify.
♦ DO NOT OVERUSE hashtags.  Keep it down to two per tweet.

3. If the location button is enabled, the visitor can click on it to see a Google map telling from where the tweet originated.  This feature is disabled by default.  For instructions on enabling your location feature for your mobile device, go here.

4. The character counter tells you how many characters you have left before you reach your 140 character limit.

The Twitter Card article says With Twitter Cards, you can attach rich photos, videos and media experience to Tweets that drive traffic to your website. Simply add a few lines of HTML to your webpage, and users who Tweet links to your content will have a “Card” added to the Tweet that’s visible to all of their followers.  Read more.

Being new to social media, and thus having only a few followers, can be daunting. After you create your social media profiles, you need to grow your social following. Mining users is an effective social media marketing strategy, and a good way to build a following on Twitter.   Read more.

Maximizing your tweets as a marketing tool

Facebook may have the largest number of active users, but no platform is better at connecting brands and their followers in real time than Twitter. Unfortunately, very few marketers understand how to properly leverage Twitter. Sound familiar? Well, you need to revamp your approach and focus on engagement….tweets with the words “top,” “follow,” and “please” are more likely to be retweeted. Other phrases and words that see a lot of engagement include “check it out,” “new blog post,” and “free.”  Read more.

For my agency’s clients, we know exactly who our target audience is and what they are interested in. This allows us to find them on Twitter and quickly begin developing relationships.    Read much more.

5 symbols beneath picture in tweets 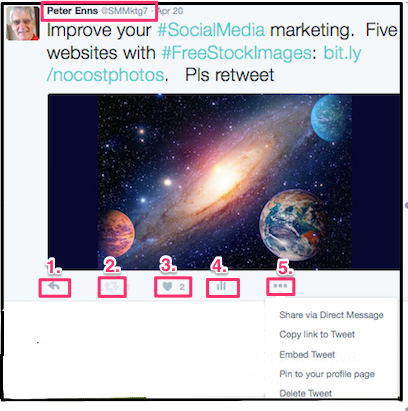 2. Retweet. It sends that tweet to your followers.  (Read “mentions” below to know when & when to not use the period in front of an @ sign in your replies.)
3. Favorite. The person who tweeted will get a notification that you favorited (same as “liked”) their tweet. Number beside heart tells how many favorites tweet got.
4. I don’t know.  If anyone knows, please write it in the comments section so that I can update this page.
5. Menu.  If you click on the ellipsis, you will get the menu shown above.

♦ An “at” symbol followed by a person’s username.
♦ An at mention for the tweet above would be @SMMktg7.
♦ An at mention is used to reference another Twitter user.
♦ Use @SMMktg7 within a tweet & a user would go to SMMktg7’s profile when they clicked on that at mention.
♦ If a period in front of @ sign in either a mention or a reply, anyone within tweeter’s feed can see post.

Abbreviations:
♦ Many commonly used abbreviations in various tweets.
♦ Make it easier to stay within the 140 character limit.
♦ Careful.  If using tweets to promote a product, abbreviations can be a distraction
♦ Definitive list of social media abbreviations: Bufferapp Blog.

More Twitter features and tricks are featured in the video and the blogs referenced below.

If your tweet starts with a username (e.g. @mattsingley) then it will only be seen by that person and anybody who follows both you and them. If your tweets starts with any character or symbol other than the @ symbol, it will be potentially seen by everybody that follows you, whether or not they also follow the person mentioned.

5 Reasons Why Your CEO Should be Tweeting

The Social Times blog gives 5 reasons.  The first one explains how Twitter can help a CEO give a message to the press.  It says:

Speaking one-on-one to the press can be a great way to network and make product or partnership announcements. And if your CEO is on Twitter, this process becomes a lot easier.

Many journalists use their own Twitter accounts to source stories and conduct research. They are always on the lookout for a good scoop. By connecting to the journalists covering your industry, your CEO will be able to form positive relationships with them. He or she can compliment them on a recent article, point them to industry news, and even offer to conduct an interview as an expert.

Mentions have the @ sign in front of the username within the tweet.  It cannot be at the beginning. It shows up only in your feed, in the feed of the person being mentioned and in the feeds of people following both you and the mentioned person.

To find the higher quality blogs about Twitter, download a free copy of CurationSoft.  Then enter phrase using the word Tweets into the search box. (I did not use the word Twitter because it is too commonly used — 83 million times/month.  Tweets is used only 33 thousand times/month worldwide.)

If you will upgrade from your lite (free) version of CurationSoft, you can become an affiliate and sell the software from your website. You will get a commission every time someone upgrades form the lite version to the paid version