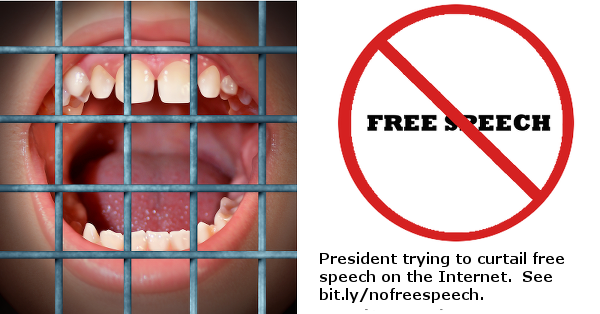 As of midnight on Sept. 30, 2016 the US Government is ignoring the 1st amendment.  It is giving up Internet control to the Internet Corporation for Assigned Names and Numbers (ICANN).

The Internet will then be governed by a “multi-stakeholder” model, including businesses, individuals, and foreign governments. According to Internet expert Lee Romanov, this means China or Russia could control what you upload, and the information you search for.

Why is this happening?

The big questions are:

♦ Why is President Obama giving up Internet control ?
♦ Why are so many North Americans unaware of this?
♦ Why are we not allowed to help decide this issue that will dramatically impact our lives?
♦ Ted Cruz says; “It a violation of federal law” but that’s not stopping Obama. Cruz asks “Where’s the gain?”

Ted Cruz says that the administration is “pushing through a radical proposal to take control of Internet domain names and instead give it to an international organization, ICANN, that includes 162 foreign countries.” Cruz warns this will empower countries such as Russia, China, and Iran to censor our speech on the web.

Who Is ICANN & How Are They Funded

ICANN is responsible for establishing the Internet’s global Domain Name System.  That includes policy development for internationalization of the DNS system. They are primarily funded by the registrar’s who sell you your domain names.

When the US passes over control to ICANN, long-term funding must come from the entities that will benefit from ICANN services. It’s power is immense. ICANN can delete anything online, including your website.

What’s the risk to the 1st amendment?

If you think no one is interested in controlling the internet, think again:

This will become it’s own pay-to-play model for the rich and self-interest groups.

I tried advertising this page with my Facebook account.   The text of the ad would have read “Danger: Eliminating free speech on the Internet. Act fast. Government trying to remove 1st amendment right. See bit.ly/nofreespeech.”

Facebook said that they could not let the ad run because it violated their adverting policies.  Sounds like Facebook is in favor or restricting our free speech.

What can you do about it?

Go to this website to fill in a form with your comments.  There also is much more information about this 1st amendment infringement.