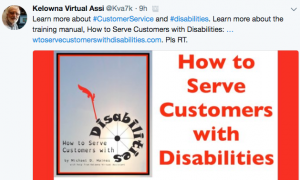 After setting up the appropriate website and listing the product on Amazon, I decided to try my luck with a series of Twitter ads.

The product is an ebook on Amazon. There is more about the ebook below.

There is more about setting up Twitter ads elsewhere in this website. I will be setting up multiple Twitter ads. This blog post will give you information about how I set up each of those ads.

Breaking down the ad

For this series of ads, I will be using the Kelowna Virtual Assistant handle (Kva7k).

Below is a breakdown of the various components of the ad you see above.

It is just plain silly to have a Twitter ad without an image. I rarely even have any tweet without an image. An image draws attention to the tweet and helps explain what it is all about. Remember that a picture is worth 1000 words.

If your width and height are not in the proper proportions (2:1), part of your image will be cropped.

See the Photo Resizer blog post to learn more about how to create a properly proportioned Twitter image.

The purpose of the this ad will be to sell an ebook called How to Serve Customer with Disabilities. People use hashtags to find tweets about a particular subject.

Our title is about 2 subjects: customer service & disabilities. So, my two hashtags are #CustomerService & #disabilities.

In order to find how good a hashtag is, I go to hashtagify.me and search for it. Among other things, I find its popularity.

The popularity of #customerservice & #disabilities are 67 and 53.5 respectively. Those numbers suggest to me that the two hashtags I chose will help me to get more tweet views.

It’s a good idea to use CTA (call to action) terms. Each of my 2 sentences began with Learn more about. The type of visitor who will be interested in the two main subject matters (customer service & disabilities) will be wanting to learn more.

The end of the tweet says Pls RT. That’s a generally accepted abbreviation for please retweet. When a tweet is retweeted, expect more people to see it.

An unadvertised tweet will be seen by a limited number of people. To make sure lots of people see it, use Twitter ads to sent people to the tweet.

Set a daily budget (I chose $3/day because I’m just starting) and time.

Within minutes of the ad being launched, I had received 2 link clicks.

The 4 Ps of marketing

The 4 Ps of marketing are

In order for effective advertising to occur, it is necessary to pay close attention to each of the Ps.

My own personal bias is that I must sell high quality or nothing. In the past I’ve had too many problems when the quality was lower than I had thought it was. 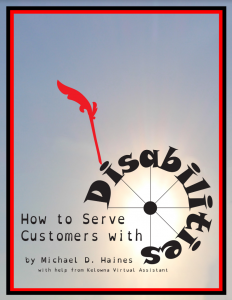 In this web post’s example, the product is an ebook being sold on Amazon. Specifically, it is a training manual to train customer service staff how to serve customers who have mental or physical disabilities. (See it on Amazon.)

I man with cerebral palsy, a nurse and I  wrote the book together. We were very diligent, going over every sentence very carefully. Many sections were gone over multiple times. We wanted to create a highly effective training manual. Judging from the testimonials we got, we succeeded in doing that.

I’m promoting it on Twitter. That social media works all over the world and it is easy to deliver digital products all over the world. So, I’ll be using Twitter advertising to promote it to the major English speaking countries: United States, Canada, UK, Australia & India.

Ebooks are cheap on Amazon. I recently bought a 250 page ebook for $9.99. People expect to get them cheap.

Then I will see which of the prices is the most profitable.

Step #1 — Create a persuasive website that has all of the important information people would want to know.

Step #2 — Get the product listed on Amazon.