My wife uses 🙂 and 🙁 for Facebook smileys.  I want to surprise her and show her a website where she can find all sorts of pictures of smiley faces and other emoticons.

I found a list of emoticons online entitled List of Emoticons for Facebook. After you get to that web page, there are two classes of emoticons and

Don’t overdo those emoticons.  If you do, they will confuse the reader and be rendered useless.

I’d say have a maximum of 2 on any one post.

You can use these emoji-like characters to express a range of emotions, including sadness and anger, meaning they can be considered an alternative to a Dislike button, a feature that many Facebook users have requested from the social network.  Read more.

The Bible in emoji 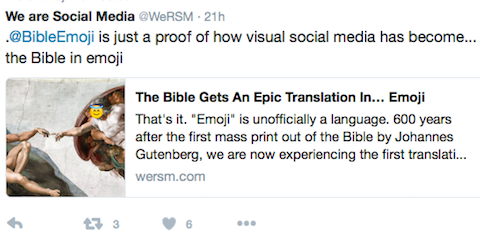 if The Good Book was getting too much to read in your everyday language, you can now read through the text with the assistance of emojis. Read more.

You can get the Bible in emoji for iPad or iPhone for $2.95.